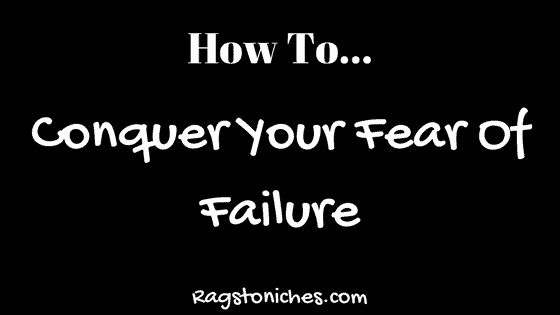 How To: Conquer Fear Of Failure – In Online Business.

Since developing this website, I have played a role in many people starting their first blogs and online businesses.

One of the biggest things that holds people back – is fear.

I know this all too well, because I have many fears as well and they can still hold me back today.

However, I think it’s important to acknowledge your fears head on.  Once you recognise what is holding you back, you can regain control and push through.

People who do succeed and achieve their goals, don’t do so because they don’t feel fear – they do it in spite of those feelings.

What Key Things Hold People Back?

I notice a couple of key things that regularly hold people back.

Both things in involve a fear of failure, but in slightly different ways.

In the first case, people are not even getting started.  They’re still at square one and quite literally paralysed by fear.

They’re worried they could dedicate months to a website or blog, for example, only to discover that it was a giant waste of time for them.

I shared this exact fear when I started my first website.  I made a couple of little sales, but the niche was too narrow and not popular enough.

I’d written 30 or so posts and had spent a couple of months on the site before I realised that it wasn’t what I wanted.

The important thing is:  This realisation didn’t feel anywhere near as bad as I thought it would.

Why?  Because I’d learnt so much from the experience.  It wasn’t wasted time at all.

You can learn just as much, (if not more) from your failures that you can do from your successes.

My second website was better, it made more money but the problem that time was interest.  I wasn’t very interested in the subject!

Gradually, it bored me more and more and I lost interest.

This is another important thing to bare in mind.

Sometimes, even when a website is making some money, this alone may not be enough to motivate you to keep working on it.

With this is mind though, the worst thing you can do is do nothing.

Taking zero action will lead you nowhere.  You have to take a chance and think of it as a journey and a learning experience.

You probably WILL make the wrong choice first time.  But this is just part of the process.

The other type of fear emerges when you’re already on your way, you’re working towards your goals but may get stuck in a rut.

You may have doubts and insecurities and are too worried to take the steps you need to progress your business.

Weird as it may sound, many of us actually fear becoming successful and there can be many reasons for this.

Some reasons may include:

How To Conquer Your Fear Of Failure & Move On:

So, once you’ve acknowledged that fear is holding you back, what do you do?

Consciously Bring The Fear To The Forefront Of Your Mind:

You need to stop hiding from your fear.  If it helps, write about it in a diary, or write it down and stick it somewhere to keep you consciously aware of it.

Whenever you start putting off progressing due to fear, make a conscious effort to acknowledge you’re afraid and make steps to push through.

Maybe have a to-do-list of the steps you need to take to make it happen and commit to ticking off one a day.

Alternatively, tell someone about your plans.  e.g:  “I was really worried about sending that outreach email, but I’ve written it and I’m sending it in the morning.”

Telling somebody else about your fear, can get it out in the open and encourage you to stick to your word.

Accept You Will Fail – And Embrace It:

Failing is no bad thing.  It can even be a great thing – although, it probably won’t feel like it at the time.

There’s so much information you can gain from failing.

You need to remember, that every time something seemingly negative happens, there is usually something else you can gain from that.

Turn failure to your advantage.  Next time you experience a mini failure – ask yourself, where is the positive to be found here?

A memorable post by John Morrow comes to mind as I write this, it certainly gave me something to think about: check out lesson #4, the art of the counterpunch.

Are You Being Influenced By Your Past?

Often, the negative things we’re told as children can stay with us a very long time and effect how we experience life as adults.

You may have been told that you wouldn’t be a success.  That you were lazy, stupid, or had no talent.

It important to acknowledge these underlying feels and know that they do not define you.

They may have been things that were said to you, but now they are just thoughts in your head and have no baring on your life today, nor who you are.

You can achieve whatever you set out to right now, from today.

Learn From Others, A Bit Further Ahead In The Game:

While, of course, there are always going to be the superstars in your industry to look up to and admire.

The level of their success may seem unattainable for those who are just starting, or who are fairly early on in their journey.

Some of the people I’ve found the most inspiring over time, as those people who are maybe only six months to a year or so ahead of where I am.

Don’t be afraid to reach out to some of these people too – for the most part they will be flattered that you’ve thought to ask them advice.

By creating short term goals, (weekly, monthly) this can keep us motivated and focused in the short term.

When our biggest goals seem to be so far in the distance, celebrating the smaller wins can be massively important.

Everyone fears.   But what are you going to do about it?

How people react to their fears and deal with them, can make the difference between whether someone succeeds – or not.

Fearing failure will only halt your progress and potentially prevent you from reaching your goals.

Better to try an fail, than to take no action at all.

How much have you experienced a fear of failure and how do you deal with it?