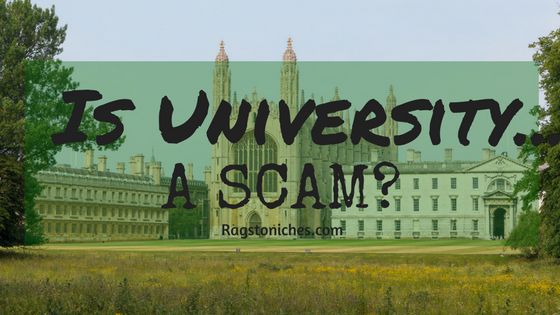 Is University A Scam?

It’s certainly considered by some to be the biggest scam of the modern age.

A lot more people are catching on to this way of thinking too.

In the UK, (my home) the cost of University is extraordinary, with students, (at the time of writing) claiming up to £9,000 per year in tuition costs…

and an extra maintenance loan of up to over £7,000 per year!

This alone would mean £16,000 a year debt – before overdrafts and other costs.

Over a 3 year degree, this is £48,000 over the course of three years – and many can leave with significantly higher debts.

In the UK, while you don’t need to pay this amount back until you’re earning £21,000 per year  – the cost of paying it back when you do, can quickly make a dent in your salary.

You’ll also be stuck with paying that off for many, many more years to come.

One problem is, it’s a bit of a catch 22 – since so many jobs now require a degree.

Despite the fact that many jobs have absolutely zero reason for making it a requirement.

There are alternatives of course, such as apprenticeships and actual on-the-job training, learning a trade and so on…

Or better yet, working for yourself!

Entrepreneurship seems to be one of the least suggested routes in education.

(did your teacher ever suggest you might start your own business!?).

We are molded from a young age in the educational system to believe that there is only one right way.

Go to school, get good grades, go to a good university – get the job of your dreams. Work, work, work….

Maybe some day you’ll have enough money that you can enjoy your life – when you retire.

The alternatives are somehow not acceptable or attainable for regular people.

It’s expected that university or college is a done thing for anyone who wants to get anywhere in their life.

Other routes are a sign of failure – or too pie in the sky, too wishy washy or … just too plain risky.

You’d better take the safe route, the one that everyone expects you to take.

You can have dreams.

As long as they’re realistic…

The Pressure Is Real:

There is such immense pressure on young people to decide what they want to do for the rest of their lives at such a young age.

I don’t know about you, but when you were told about careers in school… who suggested that building your own business was a viable option?

All the options seemed to be about being employed by somebody else.

This “someone else,” being a mysterious character – one that was automatically presumed, could never be you.

There were suggested careers, paths, routes you could take…. into employment.

These were all routes you’re encouraged to be clear about early on.

But they all involved getting the necessary qualifications to impress someone enough to actually employ you – or the interview skills to blag your way in.

And whatever you did decide, you need to decide quickly – so you could apply to join the right course, in the right university.

There are so many jobs out there now that should NOT require a degree.

This has become the accepted norm in society and it needs to change.

Naturally, many jobs require expertise and skills and in these cases, a relevant degree may be understandable.

But many do not require a set of skills that make sense for a degree requirement.

Instead, there should be more training on the job opportunities.

Furthermore, there are a tonne of college graduates who end up working in low paying positions that don’t even require a degree.

If you are going down the degree path at all… then it makes much more sense to choose something that has a clear career path paved out.

Ideally with a practically guaranteed job position at the end of it.

So many degrees have very limited use – aside from the fact you’re interested in learning about the subject.

Unless you’re actually going to go into the field as a lecturer or a researcher – this is an incredibly limiting degree from an employment perspective,

I got a good degree, from a good university …

But years down the line, I can’t tell you anything significant whatsoever about it.

I have forgotten almost everything about it.  I know I am not alone in this!

A few years down the line, it’s like I never took a degree and unless you’re actively studying it over time, you will likely forget all about it too.

I did not learn anything from a single lecture either…

That’s not an exaggeration.  My mind just zoned out in lectures and any notes I did take, were completely illegible.

I passed my degree because I was self taught.

I read and took notes on the relevant subjects by reading, not from lecture notes.

I would cram learning into short spaces of time and memorise my previous essays to prepare me for exams.

I got a 1st in Metaphysics purely by cramming information into my brain in the final couple of weeks before my exam.

There is significant evidence to show that the standard lecture format is an extremely poor and inefficient way to learn.

I’m in my 30’s now and it took me this long to figure out that working for myself was the best option and that University had been a total waste of time.

While monetarily, it will be slow initially if you start your own business, the scope for progression is much better than in a regular job.

Because, you can keep growing and expanding on your own, there is no ceiling.

There is no manager or boss above you, stopping you from progressing any further.

For me, what made sense was focusing on making money online.

Because by creating an online business, you can work where ever you choose and it has one of the lowest costs of entry than any other option.

The scope to make money online is also wide and is continuing to grow.

And if you want to gain a skill that you don’t have, the information online now is so vast now.

You now have the opportunity to teach yourself, more affordably than ever before.

There has been an explosion in online education – the amount of online courses and programs now is experiencing massive growth.

In comparison with college or University – there are many online courses that are extremely affordable.

Take UDEMY for example, which has many affordable online courses, that can teach you a wide array of skills.

For some people University will be the way to go – there are some professions that will absolutely require that sort of training.

A bachelors degree is one of the most over rated qualifications of the modern age.

They appear to have a mortgage already – but no house to show for it.  And no job.

In one recent study in the US, it revealed that over half regretted their chosen subject.

Tell me about it, I changed my mind three times and still got it wrong.

What’s more, nearly half of recent graduates can’t even get a job in their chosen field.

Close to half needn’t have taken a degree, because the job that they’re in, (that they never wanted) doesn’t even require it.

There is major pressure on kids to decide what direction their life is going to be – when their whole life is ahead of them.

Why should they be forced to decide what they want to do for their entire lives – when they’ve barely started experiencing it?

What Will I Tell My Own Children?

I will say… you don’t need to rush, take your time.

Take some time out.  work, travel, experience life and then see if University is really what you want or need.

I want them to spend some time figuring out who they are, before they decide what their life should or shouldn’t be.

It looks like I’m not alone, University applications have fallen in recent years and maybe this is start of a trend.

Something needs to happen, but only if people take action to change the current situation.

What do you think….  Is University a scam?

I’d love to hear your comments.

PS… if you’d like to know where I learnt how to start an online business, this is the place.