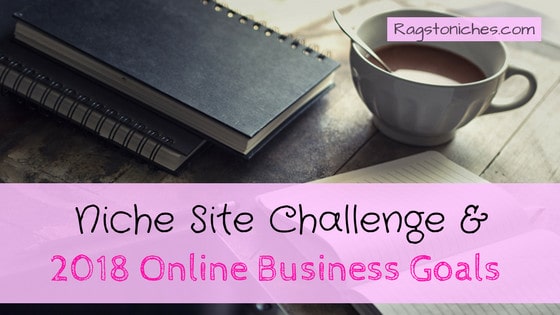 Ok, so this post is a little late for new year goals – but better late than never right?

I’ve had a little break over at Ragstoniches for a couple of weeks and had some time to think about the year ahead.

I’m definitely ready to get back to work and I thought this post would be the ideal one to lead me into 2018.

So, it’s now January and of course, I’ve been thinking about my own personal online business goals for 2018.

I tend to have ongoing goals month by month… so, thinking of goals for the whole year ahead seems quite huge for me.

But the great thing with goals, is they don’t have to be fixed; you can tweak them as the year goes on.

The first thing I’d like to do is develop a blog that I’ve really neglected since quite near the start of my whole journey into this online world.

(By the way.. I will be using the word blog/site/website to mean the same thing here!).

I worked on the blog in question for quite a good few months, then quite sporadically…. and then barely at all.

It’s now two years old and despite not working on it, it brings in anything from around $50 – $100 every month.

I’ve started to do this via Tailwind and I’ve noticed a traffic jump since I’ve started already.

I will write about Tailwind, once I’ve got to grips with it a little more.  I’m also going to start using it for this blog.

Update: I wrote about Tailwind here.

If I put a little work into that website each week, I would like to think I can build that side income to $500 a month by the end of the year.

This is a low target, because I’m not confident about how much time I can spend on it.  Primarily, my focus is always going to be on my main blog, (this one!).

In any case, I’ve decided to post one new post per week to the niche site – which seems completely achievable in my mind.

I would be delighted if I achieved that additional income by December and I’m confident that I can get there.  I will update mid 2018 and see where I am in relation to that target.

If I don’t reach my target, I will try and analyse what’s happened and why it hasn’t worked out.

I’ve been working hard to create a routine that I can stick to and manage to designate my time between different blogs, this blog and an online tshirt business.

I’ve found that by having a consistent routine; I always get the most out of my time.

There was a period in 2017 when I really got a routine together and then I let that slide towards the end.

So, I one of my key goals is to start working consistently to a set routine.  I’ve already started this and it’s been working well so far.

One thing I’ve started doing, is going to my local coffee shop each morning.  I’ve found I manage to get more work done there in a few hours, than I may do in several DAYS at home.

I’ve been looking back at some posts I’ve previously written, will help me get back on track…

I’m going to take some time to look back on that advice and start putting the advice into practice again.

The second thing I’m trying to build is my tshirt print on demand side hustle.

I’m currently on Merch by Amazon, (read post here) but I want to expand on to other platforms.  Primarily, ETSY, who now also have a print on demand option with Printful.

I have been neglecting Merch by Amazon over the last couple of weeks and haven’t been uploading at all.  My December sales were just under $100 for that month in profit.

Like my niche site, I would like to be earning a minimum of $500 from Merch by Amazon by December 2018.

I feel that this is a modest and realistic goal – as long as I am disciplined and stick to uploading consistently.

The other issue with Merch By Amazon; is dealing with their own issues and teething problems.  Sometimes; they haven’t been able to deal with the demand and have often frozen accounts from uploading/editing shirts; or even made some Merch shirts invisible in the search altogether.

Consequently; it’s not just a case of working hard.  But also coping with certain aspects that are out of your control.

I had a promising October, reaching my first $100 month on Merch by Amazon.

Followed by a terrible November, (around $30 profit).  In December things picked up, (around $90 profit) and so far January has been awful again, (a couple of sales, with 77 shirts live).

Last but not least; I need to focus on my growing this website and make sure I’m consistently writing content and building up my traffic.

I also plan to, (finally) complete a freebie course that I can send out to new email subscribers.  This was on my to-do list at the beginning of 2017!!!

I got close to completing it and stopped.  I had some mental block about potentially switching email providers… I wasn’t sure which path to choose.

This IS something I need to complete within the next few months.

I also need to switch over a to a premium theme for this site, something I’ve intended to do for well over a year.

In the month of December, traffic dropped on Ragstoniches to anything up to two thirds of my usual daily amount.

This is pretty normal, (so I hear).  Traffic has now been steadily rising again in January and is rising above what it was in November….  which has been encouraging to see!

One thing I have learnt over the last couple of years, is that I can’t spread myself too thin.

By being overly ambitious with what I wanted to do, I ended up achieving far less than if I’d just concentrated on just a couple of things and made them work.

So, this year I am zoning in!

All the best and Happy New Year,