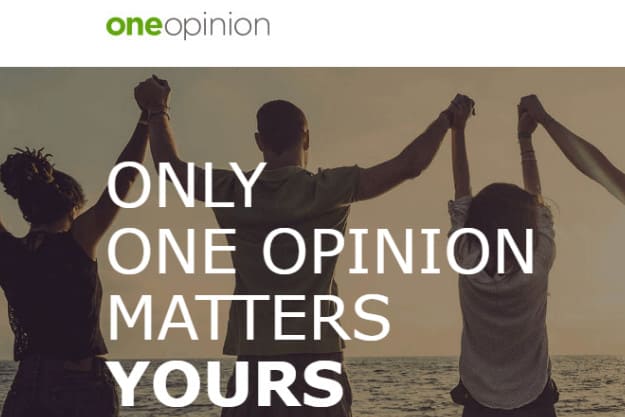 What Is OneOpinion? – Now Merged With Zoom Panel!

OneOpinion is a standard survey-related site, where you can earn a small amount of money for answering questions on a variety of topics; in order to help businesses improve their products and services.

Consequently, there is no point looking at the old reviews and complaints of Zoom Panel – but we should look at the more recent reviews, since this merge has taken place.

Zoom Panel was just a regular paid survey site that offered Amazon vouchers as a reward and gave you 50 points for signing up with them.  You needed $20 to withdraw anything – which is very high these days.

By contrast, Oneopinion appears to have a slightly better reputation to begin with, but still some mixed feedback.  Which I will explore in a moment!

You can sign up to OneOpinion from a variety of countries – You can see the countries you’re eligible to join up from below.

You can also sign up from as young as 13, with parental permission.

>>> Tired Of Making Peanuts Online?  Try This Instead!

Unfortunately, you need to reach the $20 payout threshold before you can withdraw anything here.

I just don’t agree with these high payout thresholds, because I know for a fact that a majority of people that sign up to these sites DO NOT stick with these sites for very long at all.

Most people may complete a few surveys, realise they take a long time and aren’t worth their time – then they quit.

But because the payout threshold is so high here, it means a majority of people signing up will never be paid, because they won’t do enough surveys to achieve it.

Furthermore, you can only keep points for a year.  So, you can’t do them for a while, quit for the rest of the year and then expect your points to still be there.

Cash out options are also limited.  They only have paypal and prepaid giftcards as an option.

Being screened out of surveys, or “not qualifying,” after completing a bunch of questions, is very common.  But many sites never reward you for that wasted time.

OneOpinion do reward you 50 points per survey that you get screened out of and they’ll do that up to five times in a day.

No, it’s not much to speak of – but a token gesture at least.  Better than the cop out: “entries into contests,” that some sites offer.

Or worse still, nothing.

Some members do report reaching that $20 threshold more quickly than some other competitors online and their customer service has also had some favourable feedback.

A key complaint arising on the net, suggests that OneOpinion recently started to pay less than they used to.

Previously, it’s been said they paid up to $2 per 15-20 minute survey and that these days it’s about half that.

Generally being screened out and low-payment are the key complaints – but these could be complaints held against any survey-related site online! 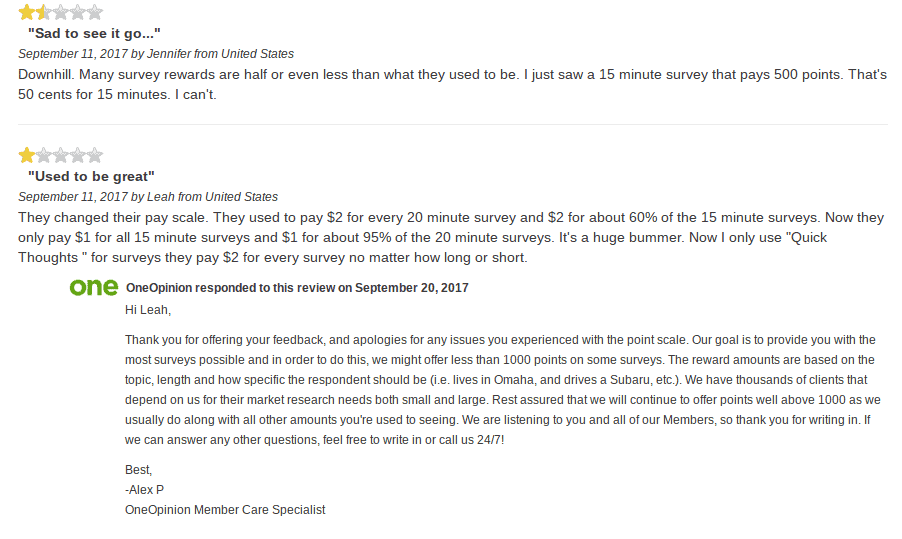 Other issues resolve around that large payout threshold and the limited rewards available.

Signing up for me here was fairly simple.  I simply entered some basic personal details and confirmed my email address.

They have an extra level of security set up, whereby you need a code to complete the sign up process.

There are various ways you can do this – I opted for a free SMS to be sent.

You can then access your own dashboard, where surveys become available.

Unfortunately, the first three surveys I attempted, I was quickly screened out.  This is extremely common, whichever survey site you join.

One positive was that the screenout from these surveys happened quickly, generally within the first couple of minutes.

While this is still very frustrating, I have had to go through far more questions prior to being screened out on some other websites.

After yet another failed attempt, I was surprised to see that there were no more surveys available.

How many surveys do you find available?  Let me know in the comments below!

So, after all that sign up effort and four surveys that I was chucked out of, I had made 200 points.  But I’d have to make 1000 points before I’d even made a dollar.

Was it worth it?  I spent about 30 or so minutes on the site… for 20 cents?  Unless you really enjoy the process, this isn’t a good way to make money online.

What Is OneOpinion – A Waste Of Time, Or Pocket Money Opportunity?

OneOpinion isn’t a scam and some users do report enjoying this platform and preferring it over others of its kind.

Others find that it just takes too long to reach the payout threshold, that the pay has decreased in recent months and that they’re screened out too often from surveys.

I rarely ever complete surveys for money online anymore and I only actively use this sort survey-related site, because it has a variety of other ways to earn, (such as cashback).

What do you think….  Is OneOpinion worth it to you?  What is your favourite site like this?  Let me know in the comments!

Ultimately, of all the ways to make money on the internet, answering surveys is never going to bring in very much money and they can be frustrating to do.

This seems to have less complaints than many I check out though, so you can check it out for yourself.

I make the most online right now via affiliate marketing.  You can check out some of the recent companies that have paid me online here!