What Is Take Surveys For Cash!?  A Scam?

Apparently “Jason White” can tell you a secret that bags him over $3500 every single month, just by taking surveys.

He tells you that YOU TOO can learn how to get offered high paying surveys and get accepted by them and make big bucks.

What Is Take Survey’s For Cash?  Review In Brief!

Product:  Take Survey’s For Cash
Creator: “Jason White.”
Money Making Opportunity?: Peanuts
Price: $37 but goes up and down.
Overall Rating:  Not recommended!  This is a dishonest program that is packed full of lies.  Do not believe the hype here, it’s all complete BS.
Website: takesurveysforcash.com

>> Fed Up Of Making Peanuts Online?  Try This Instead!

Take survey’s for cash claims you can make a tonne of money through doing specifically high paid surveys – and that he can show you how to get them.

Survey scams are pretty rampant because they’re so easy to do – a mass amount of people are trying to make the maximum amount of money they can for the absolute minimum effort.

Surveys seem to potentially fit the bill, because they are something you can do in your spare time –

you don’t need any knowledge or expertise to do them, you just do them and that’s that.

Anyone can mindlessly answer questions, so it’s easy.  Or is it?

The problem is – by taking part most regular surveys, you’ll be lucky to make $1 per hour.

And that’s only once you’ve been accepted on to the survey, (many will throw you off if you don’t fit the right criteria and, most of the time, you won’t).

$1 an hour is never going to add up to any sort of full nor part time income.

The reality is, there are hundreds of survey sites out there and millions of people taking part in them.

The real beneficiary of money are the survey sites themselves, not the people filling them out.

it certainly would not be a “secret” for very long.

To be clear – there is no secret here!!

This program is being marketed out in the open on Clickbank, who – as I write this – have over 6 million digital products available to buy online and 200 million customers.

In addition, apparently “take surveys for cash,” are paying their no.1 affiliate, (who is promoting this product) over 100k per WEEK by selling this product.

Clearly, this is the real how to make real money from this product, it’s not by taking surveys, it’s from selling the product.

Getting-rich-quick SELLS like crazy, it’s as simple as that.  But what they’re selling is a lie, it is not a reality.

This single affiliate is selling to thousands of customers every single week and he’s only one person.

I can tell you from checking their statistics on clickbank, that this product is selling very well!

Unfortunately that also means plenty of people will be promoting it as the real deal.

(For more info on affiliate marketing, scroll down to the last paragraph of this post!).

Does this program really sound like a “secret” to you?

This product is going to be selling to thousands of individuals every – single – week!

This is NO secret.

Survey scams are unfortunately very common and a lot of people will buy into them.  They may even be relatively pleased with what they get, which is generally a database full of survey sites which are free to join.

These are all sites you can find without paying any money.  But a database can be handy to work from, even if you’re not making hundreds of dollars a week.

Jason White shows you the “Proof” of his earnings… 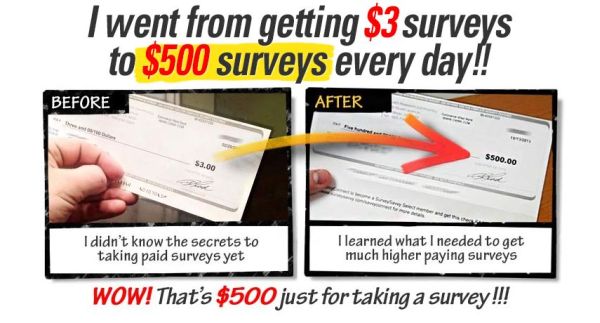 Never take this kind of “proof” at face value.  It is so easy to fake this sort of thing.

It’s not even been done very well at all!

Check out the amount to the right – the $500 written there doesn’t look very realistic to me – doesn’t it look as though it’s just been typed on?

The amount of over inflated claims in this program are impressive.

I have seen some truly ludicrous claims before, but this is just a push too far…

Jason White claims to have made his friends and family over a MILLION dollars just from doing surveys.

Having researched many survey sites in recent months, the ridiculousness of that claim is beyond insane.  No one has ever made anything close to a million dollars from doing surveys.

PROMOTING survey sites and making a million dollars on the other hand, that IS a reality.  Some of the top affiliates promoting this very product will have made a lot of money.

So, What Do You Get For Your Cash?

you can sign up for all these survey sites completely for free anyway!

However, for every survey site that you sign up to on their list, (via their link) the creators of this program will earn a commission from survey sites.

It’s amazing really that some of these sites will allow them to falsely advertise by making these crazy income claims.

Most legitimate survey sites will tell you straight up that you will not earn very much money.

If you see a survey site claiming you can make hundreds or thousands a month, they’re one of the ones you definitely shouldn’t be trusting with your personal information.

The completely BOGUS claim is that you can make $500 per survey….

This is just an entirely false claim.

Does this mean you can’t make money with any surveys they’ll direct you to?

No… you can make a minimum amount of money with online surveys.

I have written about many survey sites on this site and some I prefer better than others merely based on the user experience.

If you’re not bothered that you don’t make a tonne of money per survey and just want to make a few bucks here and there then…   that’s up to you.

You can decide whether you want to try it – but just take it from me, you will not be answering $500 surveys any time soon!!

Survey Sites Have The Last Laugh….

Survey companies try and make it appear that you are getting something for next to nothing.

Even more valuable however, is the amount of TIME you can spend giving them this information and wasting your time.

This is why I participate in very few survey sites at all.  For the most part, they really are just a waste of time.

The key one I do participate in is swagbucks – I use their search engine and get points for doing so, there is no effort involved.

It’s not a way to make a lot of money though!  Just a way to save a little and make some pocket change.

Beyond Paid Surveys Online – What Can You Do?

I spend my time checking out various ways to make money online and you can really make very good money doing so, but it isn’t an overnight success type situation!

When it comes to making money on the internet, there are always better options than survey sites.

In fact, if you’re willing to do a bit of work, there are lots of ways you can make considerably more money than you ever will from a survey.

Most of the people actually making ANY money from “Take Surveys For Cash,” or survey sites in general….are actually affiliates!

Those are people who are promoting this product via their blogs, websites, email lists and social media.  They earn a commission for sending people like you to the survey sites, every single time.

In fact, I’m dealing with someone right now who is trying to go around commenting on all my survey reviews and leaving their affiliate link to THIS actual product, (as though I’m going to post their spam comment! 😮 ).

Spamming blogs and websites is NOT the way to go about trying to make money from affiliate marketing.

If you want to learn how to do it the right way, (and a way that does not involve trying to post your links all over the web….) then I do have a recommendation!

I hope you found this review beneficial!

Did you sign up to take surveys for cash?  Let me know In the comments!

Other posts that may interest you…