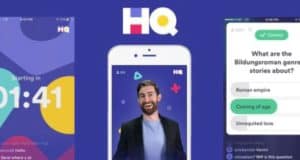 Is HQ Trivia App Legit?  Can You Really Make Money?

Hey guys – today I’m reviewing another app that can help you make you money with your smartphone.

I discovered the HQ trivia app came first and is extremely similar in nature to cash show… well, practically identical in fact.

However, HQ made big news for having some really impressive prize funds.  But it is also much harder to make money, because you have to get all 12 questions correct to get a portion of the prize pot.

All sounds interesting, but this app hasn’t escaped criticism…. so, is it worth it?  Let’s dig in and find out!

Psst… If you want to know how you could make money from anywhere in the world online – stick with me until the end of this post!

Name:  HQ Trivia App
Price: Free
Money making opportunity: pocket money & maybe more (well, if you’re amazing at trivia!).
Overall ranking:  Legit.  Personally I love both this AND cash show.  However, it’s more for fun than a real money making opportunity.  Although they do have some really big cash games at times and even the odd celebrity presenter, (if you’re lucky).

Unfortunately, it seemed this app got so popular initially, that it was unable to manage the amount of people logging into play, (hundreds of thousands).

Also, as prize values increased, cheating became inevitable. As this article suggested, it became more of a game of who could Google the answers efficiently in the time provided, (which is only seconds!).

However, the way I see the game now; I would think it’s almost impossible to cheat your way through.  You’ll see what I mean if you play.

Aside from the lightning speed, they have plenty of questions that catch you off guard – this is where you will see a majority of players get the answer wrong and they call these SAVAGE questions.

This app has been criticised for being buggy and having too many issues when using – however, the creators have been working hard to resolve these issues and personally, I have had hardly any issues now.

Getting Started with HQ Trivia:

You can sign up to play completely for free, simply download the app via google play, or the app store.

You can sign up in a matter of minutes and there is simple instructions how to get started.

For an EXTRA LIFE – you can enter my code: nat82

2. Opt in to push notifications.

They suggest you opt in to push notifications, then they can remind you when the games are on and you won’t miss out.

At the time of writing, games are on twice a day at 3pm and 9pm.

In the UK, times seem changeable!  Usually, they seem to be on at 3pm and 9pm too… but the other day, there was one at 9:30pm instead.

They also have some worldwide games, but the last one was at 2am my own time.

They currently have regular $8,000 games on the weekends!

3. Check next game and prize fund

You’ll be able to see as soon as you login when the next game is live and how much the prize fund is.

How much you can make, will depend on how many people login to play and how far they get in the game.

For example; I was playing at game recently with close to 100,000 players, but only 8 people in the end actually answered all 12 questions correctly!!!

That gives you some idea of how difficult the questions can be.

There are 12 questions per round.  If you get any questions wrong, you’ll be taken out of the game- although you can still watch the rest of it.

You have 10 seconds in which to choose an answer.

By referring others into the game, you can earn extra lives.  Simply share your referral code with them to earn a free life.

You can only use one per game though.

By giving your code to a new person, both you and them get a free life – so, it’s a win-win.

The Main Difference Between Cash Show And HQ Trivia:

What makes this app considerably harder than cash show is, you have to answer all questions correctly to be in with a chance of winning money.

Whereas, with cash show, you can earn a minor amount from question 6.

Although, you could argue that the prize value before question 12 is not worth it anyway and by keeping all the prize money until question 12, you get a lot more if you actually win.

Cashing Out With HQ:

You used to have to reach a $20 threshold before you could pay out with Paypal.

However, from Jan 2018, HQ announced there would be no minimum payout!

The payouts are going to vary depending on how many people manage to complete the 12 questions.

They have had some huge sponsored games, with some really substantial payouts.  At the time of writing, there was a $250,000 payout sponsored by warner bros in march 2018.

They had a game hosted by Dwayne Johnson, (AKA the ROCK!) with a 300k prize draw and I was lucky enough to play that game.  Although, not lucky enough to win unfortunately!

You can see that game below!

What Do People Think Of HQ Trivia?

One of the main complaints is that the app cannot cope with the amount of people that want to play.  The game lags and then people may be chucked off without reason, or the game simply becomes inaccessible.

The HQ team claim improvements have now been made, but it seems people are still complaining of the same issues, (I think they are continuously improving this).

What’s your experience with the HQ app?  Let me know in the comments.

Yet again, the key criticisms resolve around the app being unable to cope with the demand for the game.

Amusingly, many people seem to despise the host and this is a big turn off for them, (the host may have changed by the time you read this review…. )

I personally love the UK hosts of the show.

Despite the reviews about lags and so on, there are also people reporting of big improvements in this area, so time will tell.

This app is certainly not a scam and they have had some pretty major sponsored games by well known brands, such as Nike and Warner Bros!

This is free cash they’re giving away here and it’s not purely luck either – (although, you’re probably going to have to lucky guess some of those answers!).

With a fun concept and the opportunity to win money for free, it’s hardly surprising that so many people have wanted a slice of the pie.

So, there have been some issues with the app and some problems they’re working to iron out.

In the meantime, I guess I would try and remember that this app is completely free to download and you have the potential to make money using it – so take the issues in your stride and take it or leave it!

The HQ trivia app is available worldwide – although the US version obviously has a lot of US based questions.

The app has also recently launched in the uk  – the prize pool is considerably smaller for the most part, but they are getting some bigger games.

On the UK launch show… nobody won! With £500 up for grabs, that would have been a very welcome win.  🙂

So, who is tuning in?  I know I will be….  and I’ve got several of my family members addicted to the game too!

With the games I have completed with HQ, the questions seemed harder overall, but there have been games where I knew I would have got to 12 if I’d JUST got one extra question right.

So, I know there is potential there….  ONE DAY, I WILL WIN HQ!!   My husband has actually won HQ before; but unfortunately it wasn’t during one of the big games and I wasn’t even there to take some of the credit!

If you’re looking for a more stable way to make money in the long term, (that doesn’t involve being amazing at Trivia…) – you can completely learn to do that.

I make the most online through creating and running this website – mainly via affiliate marketing and paid advertising.

The great thing is, you can literally work anywhere with an internet connection.

So, it’s the perfect thing to get into if you like the idea of location independence!

*This training, helped me to start making money.

It was only after I started learning, that I realised making money online was actually a possibility for me.

I hadn’t realised before that you can actually build online business from scratch, without being a technical Wizard.

If you have any questions  – leave me a comment below.

Let me know in the comments if you have any questions.