What Is Crowdology, Legit Rewards Site, Or Waste Of Time?

Crowdology is a paid survey site that you can access from the US, but they also have a UK based site. I’m always on the look out for rewards sites to review and I hadn’t come across this one before.

I’d thought I’d check out how easy it is to sign up and start filling out surveys for cash. I read they had a low payout threshold, which I took as a good sign.

Company Website: https://crowdology.com and https//crowdology.com/UK
Money Making Opportunity: pocket money/earn gift cards.
Cost: Free to join
Overall ranking:  Legit, but limited.  This site has some mixed reviews, but I managed to qualify for the first survey I took, (which next to NEVER happens to me, I almost always have to take several surveys before I can complete a single one).  However, there aren’t tonnes of surveys here, but there are some unusual ones, that make it a bit more interesting.

What Is Crowdology About And How Do You Get Started?

Crowdology is an online paid survey platform, that will pay you for filling out survey online. Often surveys relate to things such as your shopping habits, your health, or how you feel about certain products or services.

By honestly completing surveys, you’re giving valuable information to business owners, who use the information you give them, to improve their business.

It all sounds good doesn’t it. But the downside is, you will spend a lot of time not qualifying for surveys, as they are always looking for a particular demographic and also, surveys tend to pay very badly. You would be lucky to make a couple of bucks in an hour for the most part.

For each survey you complete, you will be rewarded with a small amount of money. When that builds up to at least £4, you can withdraw via PayPal. Or wait until you reach the £10 threshold in order to redeem Amazon voucher.

It’s very quick to sign up here. Simply enter your name/ date of birth/ address and you’re done. As a last thing, you will need to confirm your email address.

From here, it asks if you would like to complete your first survey.

My Experience With My First Survey.

Something amazing happened when I went for my first survey. I ACTUALLY managed to complete it!

I have reviewed so many survey websites and I literally cannot remember the last time I managed to complete a survey on the very first attempt.

What’s more, the survey was actually FUN. It was also literally fun, because it was all about how much fun we have in life and how we feel our levels of fun could be improved and what things we find fun in our daily lives.

Perhaps this was just a one off, but I was pleased to complete this survey. It was around 10 minutes long and I made 40p… which is more than I’ve made for longer surveys in the past. 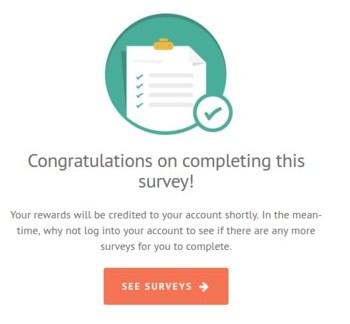 What Do Other People Say About Crowdology?

Unfortunately, despite my positive initial experience – many people do have complaints against crowdology and they tend to resolve around the same thing.

1. Constantly being screened out of surveys, but some say this is near the end of the survey.

3. Taking a long time to receive payment, whether via PayPal or Amazon.

I noticed them saying you could earn up to £10 a survey on their main page. This is a bit misleading, as you won’t earn £10 from a random survey, but from joining a focus group – which are pretty rare anyway.

It’s far more likely you’ll earn between 25p ad £2 a survey, with between 25p-£1 being the most realistic.

Crowdology hold prize draws now and again. The most recent prize I can see, is an XBOX one bundle prize.

But prizes will tend to be things like cash, vouchers, gadgets – such as an iPad, apple watch, or games console.

While these are bound to be very high entry, it could still be worth a go. You gotta be in it, to win it… so they say!

No, I don’t think it’s a scam at all. In fact, so far I’ve enjoyed signing up with Crowdolgy and everything has gone smoothly.

I managed to qualify for the first survey I completed, which was a bonus and everything works smoothly. A downside is that it is only surveys and I prefer more of an all-rounder rewards site, such as swagbucks.

Reviews are mixed for this platform, with many people pointing to poor customer service and being constantly disqualified from surveys.

Do you have any experience with Crowdology? let me know in the comments!

If you’re just making a bit of easy pocket money and aren’t interested in earning more in the long term, then that’s fair enough.

But if you’d really like to make more than that and have no idea, I recommend you look into starting your own online business.

While it’s not easy, you can gradually build up an income on the side… eventually one big enough that you could potentially work on it full time.

The dream for me is to be able to work anywhere with an internet connection one day and not just be stuck to one place.

I’m building up different streams of income now and I this training platform to thank for helping me get started.

You may also want to check out my 40+ ways to make money online.