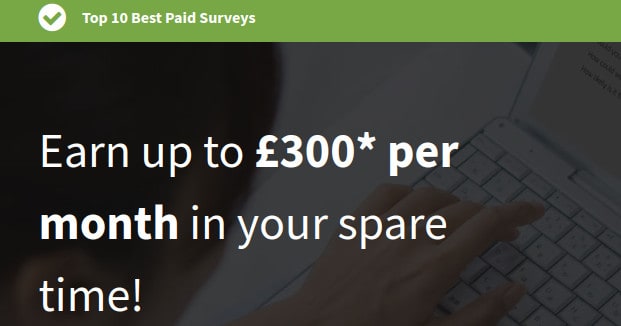 I keep seeing ads for this site all over the web.  I’ve seen it pop up on ads and regularly just searching Google for related searches, where they have ads running.

When I went to the main page, it had a statement that certainly waved a giant red flag at me.  They said, (as you can see in the image above..) “Earn up to £300 in your spare time…”

Now, I’ve seen far more ridiculous statements than this one.  I have seen many survey related sites claim you can make thousands a month in your spare time with paid surveys.  Which you can’t.

Is it feasible in any way that you could make £300 a month?

Well…. in some realm of reality, there may be some vague possibility.

But you’d most likely be trying to complete surveys 24 hours a day.  It would be more than a full-time job (with part-time pay).

…And if you didn’t want to throw your computer out of the window after a few days of doing online surveys 24/7; then I’d be seriously concerned about your psychological well-being.

That’s because doing online paid surveys can be very frustrating, repetitive and mundane.

You regularly get thrown off of surveys for not qualifying and not fulfilling particular criteria – or just not paying attention and giving inconsistent answers.

So, when a survey says it could take you half an hour, it may take you three times that just to complete ONE survey; simply because you keep “not qualifying,” and get chucked off one survey after another.

If you’re lucky you may make up to $1/£1 a survey and that would be GOOD going in most cases.

I’ve seen many surveys pay far less than this.  £1-£2 an hour would be potentially possible, but most people aren’t going to manage doing these surveys for long, because they are so slow and monotonous.

The pay is so low, that a majority of people will either not do them very much, or completely give up on them.

But hey, if you have the stamina and endurance to make £300 in a month with online surveys – then you seriously should be doing something more worthwhile with that talent.

Anyway, enough of the ranting.  Let’s go into a bit more detail here….

What Is Top 10 Best Paid Surveys About?

This site is not your standard survey site.  It’s one of my least favourite sites of it’s type and this type is known as the: Survey Aggregator!

This means, they aren’t actually a website that houses surveys themselves.  Instead, they are more like a portal site, that sends you off to survey sites that they recommend.

Are they REALLY sending you to their top 10 best paid survey sites?

That’s doubtful.  The sites they send you to, will be the ones where they get the best affiliate commissions for sending you there.

It won’t ONLY be that, because they are also choosing legitimate sites, with some long-standing reputation.  But they will be choosing ones where they are getting a reasonable payout for sending you.

By contrast, I have a post where I recommend a few extra income sites here.

I could have just linked you to sites where I get the highest affiliate commissions.  But actually, some of them I don’t get any commission for at all.  There are some I choose to include, because I personally have enjoyed and recommend them.

So, while this site does link you to legitimate sites, the motive behind sending you to those particular sites is financial.

This site doesn’t need a login, but they get you to do it so that they can capture your email.  You will notice if you return to the site, there is no where to login.

Because once you have signed up to their suggested sites, they will have already made their commission and don’t need you to continue with their site.

But if you do not sign up with all the survey sites they recommend, they will send you an email, trying to encourage you to come back and sign up.

Which also makes me wonder what they are going to do with your email address – aside from adding you to their email list.

They do promise to protect your information and only pass your info on to the third parties you select…  However, it’s highly likely you will get other offers sent directly from them.

Passing your info over to a survey aggregator does pose a risk of receiving spam email, in my experience, (having signed up to many).

Before you decide to check out site like these, I strongly recommend you open a separate email account and do not give them your personal email that you use everyday.

I was shown 7 different survey panels, (not 10 – which is odd, considering the title of the whole website!).  All the surveys on offer, are ones that  I have reviewed in the past; so you can find those reviews below.

I’m in the UK, so if you’re in the US, you will be shown a slightly different list and I imagine this is why I’m only shown 7 survey sites and not 10.

All of the above sites are legitimate survey websites, which is positive to see.  But they’re also all incredibly well known and easily found via a quick google search.

Again, they are a bit misleading when it comes to income potential.  As they put next to each survey that the max the company pays per survey is either £4, £5… or even £10 in one case.

That being said, plenty of the legit survey sites, (even the ones I’d recommend) sometimes seem to exaggerate the amount they potentially pay per survey.  You just have to take it with a pinch of salt. 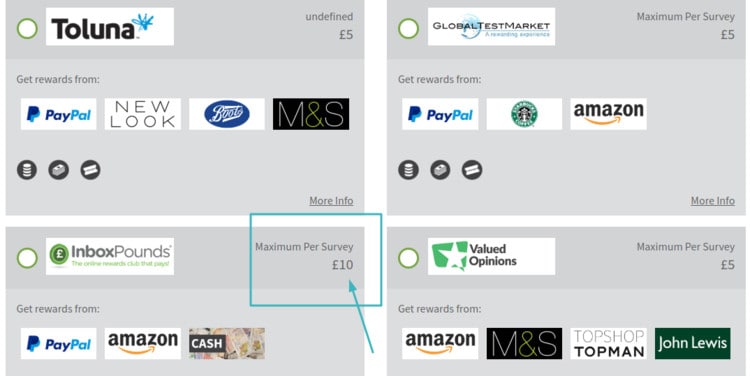 As someone who has reviewed and completed hundreds of surveys online – I think the most I ever made in a survey was around £2 and that was so rare, it was like mining for gold.

In most of the surveys I’ve done, they’ve been in dollars and rarely for over $1, most of the time it has been less.

So, the idea that there are £10, or $10 surveys just floating about ready and waiting to be taken, is misleading.  Of course, you will know this if you’ve had any experience doing online paid surveys.

There have been a couple of surveys I’ve done that CLAIMED to be worth more, but I was screened out of absolutely all of those.

Testimonials On The Site?

While they may have taken legitimate quotes, from real members… if you take a look at the actual photos on this site, it’s clear these aren’t just regular people.

Take a look at the guy below.  This is obviously a stock photo, that has been proessionally taken and all of the testimonials are the same.

If you’re taking these quotes from people, why not show their real picture?

Another thing I would be wary of, is there is no contact info available on this website.

But there is no about us page and no contact email, or any other clue as to who actually owns this website.

This is combination with the over-hyped earning claims and this fake login/sign up situation, doesn’t look good.

They Aren’t Really Recommending Anything:

As you can see from my reviews above of the sites they recommend, lots of them have negative feedback.

A majority of survey sites are very similar, there aren’t some super-charged sites that pay out huge sums for surveys – paid online surveys simply do not pay out much, no matter what site.

The only site where I haven’t experienced being screened out, is YouGov... . This isn’t one of my favourites, but it’s just one that I haven’t been screened out of their surveys & you do earn £1 each time.

The downside is, you need £50 to withdraw, which is a massive amount to have to get to.

On the whole though, the biggest issue with surveys is the screen-out issue.  That in combination with the terrible pay; make them a waste of time for most people.

I wouldn’t say they’re a scam, because they aren’t taking any money off you and they may not even be using your information, (I can’t know this for sure).

They are also pointing you to some legitimate survey sites… But are they the Top 10 best?  No.  The sites they’re sending you to have nothing to do with being the best that are available.

Although, you will struggle to really find “the best,” when it comes to survey sites, because it all comes down to a matter of personal experience and opinion.

What one person finds valuable in a site, another one will not.  So, it’s really a case of trying things out and seeing what fits.

Ultimately, this site is probably quite harmless – but it’s also pointless.

There is no need to “sign-up,” to their site to access these survey websites.  You can join them independently at any time and you will be able to find many surveys online from searching yourself too.

I don’t recommend my Top 10 Best Paid Surveys, because I don’t feel they are providing anything of value.

If you’re fed up of spending hours of your time online, just to make a small amount of pocket money here and there – maybe you’d be more interested in building up an income over time.

I make the most money online from having blogs/websites, which I can earn from in a variety of ways and more so over time.

If you don’t think that owning your own blog is for you, or you’re worried you don’t have the technical know-how; then you might be surpised by the fact that I didn’t have any technical knowledge at all when I started.

If you want to learn more, this is where I first got started online.

You also may want to check out my 40+ ways that you can make your first dollar online – and scale up!